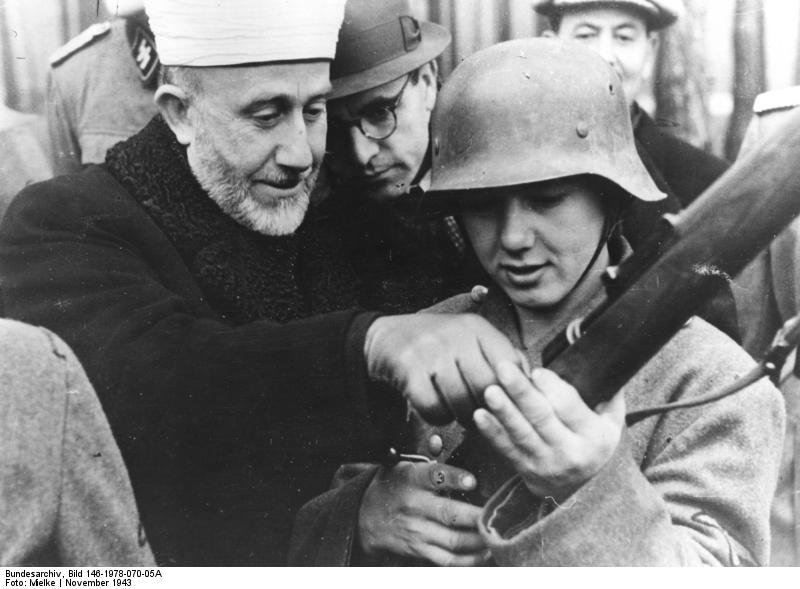 EXECUTIVE SUMMARY: Seventy-six years after the mass massacre of the Baghdad Jews, in which the then-leader of the Palestinian Arabs, Hajj Amin Husseini, was deeply involved, his heirs to the Palestinian leadership still sustain an anti-Israel and anti-Jewish campaign of racial and political incitement unparalleled in scope and intensity since Nazi Germany.

On the Jewish holiday of Shavuot, June 1-2, 1941 (5701 on the Hebrew calendar), the Muslim residents of Baghdad carried out a savage pogrom against their Jewish compatriots. In this pogrom, known by its Arabic name al-Farhoud, about 200 Jews were murdered and thousands wounded. Jewish property was plundered and many homes set ablaze.

Within a week, the British ousted the pro-Nazi government of General Rashid Ali, which had seized power in a coup d’état two months earlier, and restored the legal Iraqi government. That government appointed a commission of inquiry into the pogrom, which determined that the Nazi propaganda of Radio Berlin had been one of the massacre’s foremost instigators. The commission’s report also identified the main individuals who had impelled the assault. It pointed to the extensive activity of Dr. Fritz Grobba, the German ambassador to Baghdad, and to the activity of the former mufti of Jerusalem, Hajj Amin Husseini, who had fled to Iraq from Mandatory Palestine in October 1939 (after a short spell in Beirut) and begun inciting against the Iraqi Jews. The mufti had also worked with Iraqi subversive elements, including Rashid Ali, to overthrow Iraq’s ruling Hashemite monarchy and install a pro-Nazi regime.

In an attempt to win Arab and Muslim hearts and minds, the first Arab-language Nazi radio station was launched in Berlin prior to the outbreak of the Second World War, broadcasting anti-British, anti-American, anti-Soviet, and particularly anti-Semitic propaganda. It thus helped spread radical anti-Semitism in the Middle East, where it found common ground with the anti-Jewish tendencies in Islam. The messages in the propaganda broadcasts were designed to achieve certain goals, such as winning the Arab population’s sympathy for the Nazis and the Führer; inciting against the British and French presence in the Middle East; stoking Arab national sentiments; and, last but not least, wildly inciting against the Jews, who were accused inter alia of stealing the Arabs’ money and being behind all the Arab world’s woes.

This propaganda mill employed many teams of both civilian and military personnel, including writers, translators, academics, and Middle East experts. Among others, the broadcasts featured Arab immigrants and leaders. The mythic broadcaster and director of the Arabic station was the journalist Yunus Bahri, who reached Berlin after fleeing his native Iraq, where he had been sentenced to death for pro-Nazi activity. He was recruited by Grobba and opened his broadcasts with his famous line, “The Arab Lord Haw-Haw, this is Berlin, greetings to the Arabs.”

Known for his virulent anti-Semitism, Bahri stated proudly in a memoir he wrote after the war, “I was the first Arab to collaborate with the Nazis.” His hatred towards Jews was so intense that he was summoned for a reprimand in Propaganda Minister Goebbels’s office because of his excessively vitriolic attacks on Jews and especially his constant use of the term “Jewish criminals.”

Four days before the Farhoud, Bahri stated on Radio Berlin:

Judaism, which is compounded of Zionism and Freemasonry, has created a fortress in England behind which it carries out its crimes. The Arabs fought the Jews and expelled them from the Arabian Peninsula 1,400 years ago. The Prophet Muhammad was the first to expel them. In our time, the Arabs witness what the Jews have done under English sponsorship. The Jews have declared that they want to establish a national home in Palestine which is an inseparable part of the Arab homeland. The Arabs of Iraq now see what the Jews of Basra are capable of doing under English directives. The Arabs take note of the declarations of the English statesmen, particularly the latest two by Churchill and Smuts. Smuts said that he and England owe thanks to the Jews for their help in the war. These words have hardened the Jews’ determination to fight the Arabs, in the certainty that after the war they would be allowed to establish the Hebrew state…. The Jews are an abomination everywhere. And recall the verse in the Koran: “The greatest enemies of humanity are those who trust the Jews.”

In broadcasts after the pogrom, Bahri justified the massacre and accused the Iraqi Jews of obtaining and disseminating propaganda material from the British embassy in Baghdad. He also charged them with providing the British embassy with military information about the Iraqi army. With such malicious fabrications he lent legitimacy to the Farhoud massacre.

Bahri was too self-laudatory about being the first Arab to collaborate with the Nazis. The Mufti had beaten him to it long before. Within weeks of Hitler’s rise to power, he rushed to the German consul in Jerusalem to assure him that “the Muslims in Palestine and elsewhere were enthusiastic about the new regime in Germany and looked forward to the spread of fascism throughout the region.”

Hajj Amin had been deeply implicated in the widespread massacre of Jews in Mandatory Palestine – from the April 1920 Jerusalem pogrom, for which he was sentenced to 10 years in prison by a British military court but managed to flee the country, to the 1929 riots in which 133 Jews were murdered and hundreds injured, to the 1936-39 “revolt” in which hundreds of Jews were murdered. Against this backdrop, it was only natural for him to play a central role in the Farhoud, both in inciting the local Iraqi population against their Jewish compatriots and through his close involvement with the Rashid Ali regime.

It comes as no surprise, then, that in his memoirs the mufti blamed the Iraqi Jews for the failure of the pro-Nazi “revolution” (which in turn forced him to flee to Tehran, whence he came to Berlin where he spent the rest of the war years), thus implicitly justifying the Farhoud. As he wrote:

The fifth column played a large role in the failure that the movement [the Rashid Ali regime] suffered in Iraq. This column consisted of different elements, of which the main one was Iraqi Jewry…. During the war, Jews who were employed in the telephone service would record the important and official conversations on reels and pass them to the British embassy in Baghdad. The Jews in the postal and telegraphic authority did the same. They hurriedly sent the embassy the telegrams and letters that reached them.

Regrettably, seventy-six years after the Farhoud, it appears that the mufti’s heirs to the Palestinian leadership have learned nothing and forgotten nothing. When Mahmoud Abbas stood beside President Trump on the White House lawn and declared to one and all that the Palestinians educate their children for peaceful coexistence with Israel, not a muscle twitched in his face. In fact, during its 20-year-long control of the Palestinian population of the West Bank and Gaza as part of the Oslo “peace” process, Abbas’s Palestinian Authority, not to mention Hamas, has subjected its subjects to a relentless hate campaign of racial and political incitement unparalleled in scope and intensity since Nazi Germany. That campaign not only delegitimizes the idea of Jewish statehood but also propagates the murder of Jews simply for being Jews. And if history teaches us anything, it is that the translation of such words into action is all too easy.

This content is restricted to site members. Current users, please login.
New users may register for $50 annually at prophecybookstore.com. Inside you will find hundreds of news articles, complete audio series and exclusive videos.
* Lost Your Password?